-  August 18th, 2022, 6:50 pm #644219
Even if you have neer heard of the strategy and consulting firm Altimore Collins, their recent report on fanbases in major college football is fascinating. We can argue the methodology utilized to put this report together, but it certainly creates conversation. 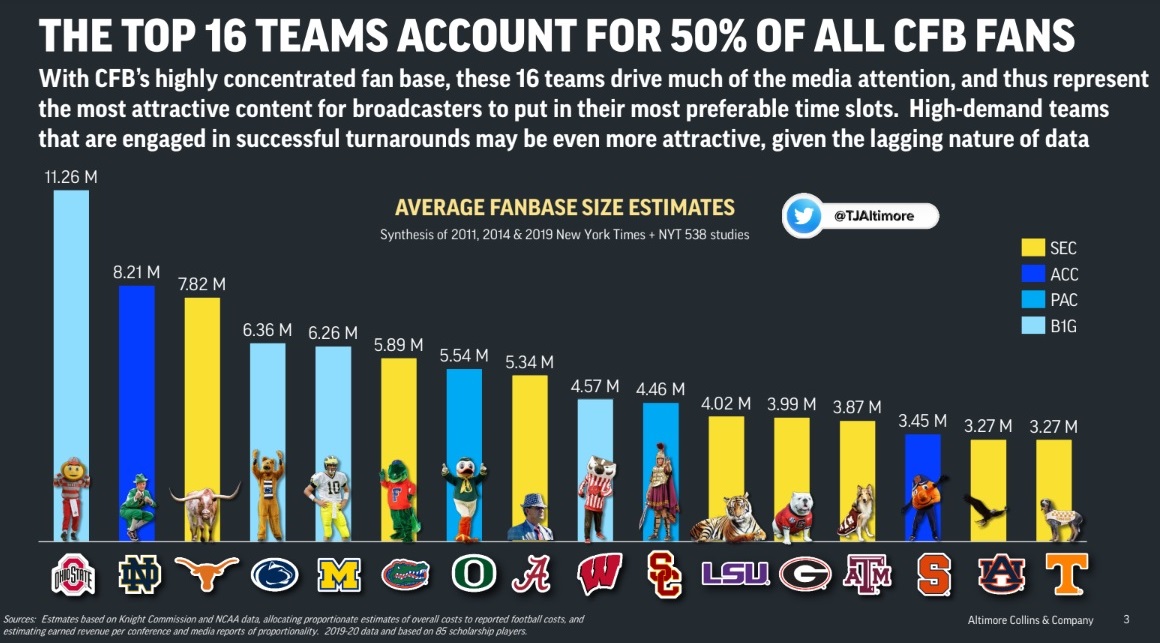 Where do the Flames factor into the report: 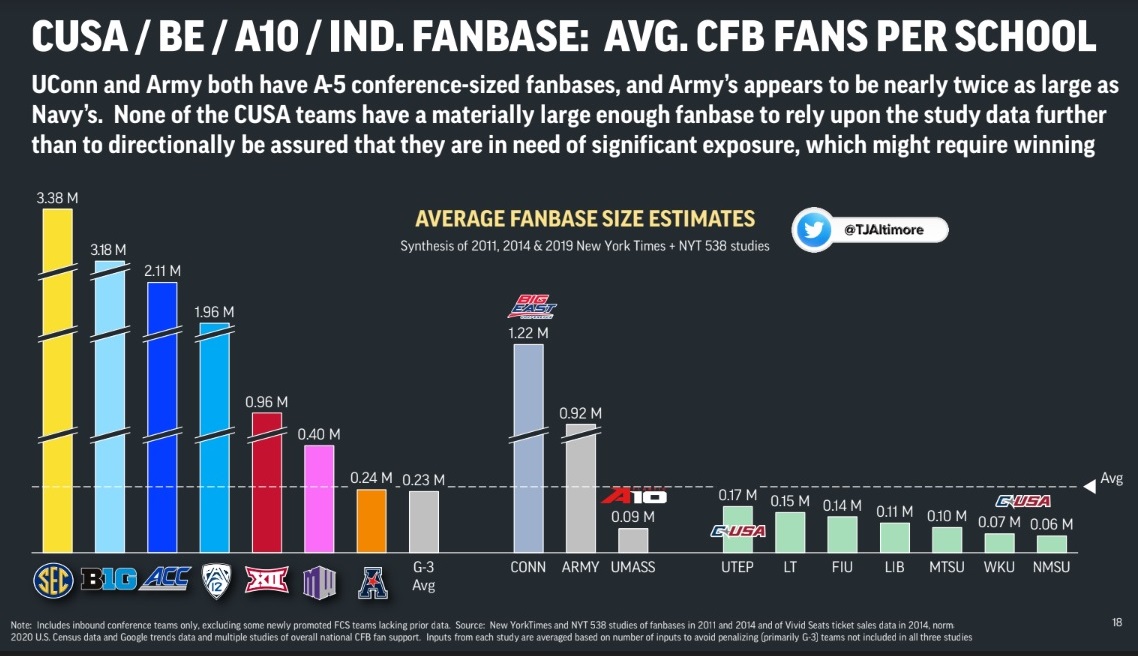 In case you were curious, we are outside of the Top 100 fanbases listed based on Tony's metrics.

It should be noted that with the report was produced back in June prior to theannouncement of the upcoming USC/UCLA switch to the B1G. So Tony created the following graphic for what it shoukd look like in the battle between the two super conferences. 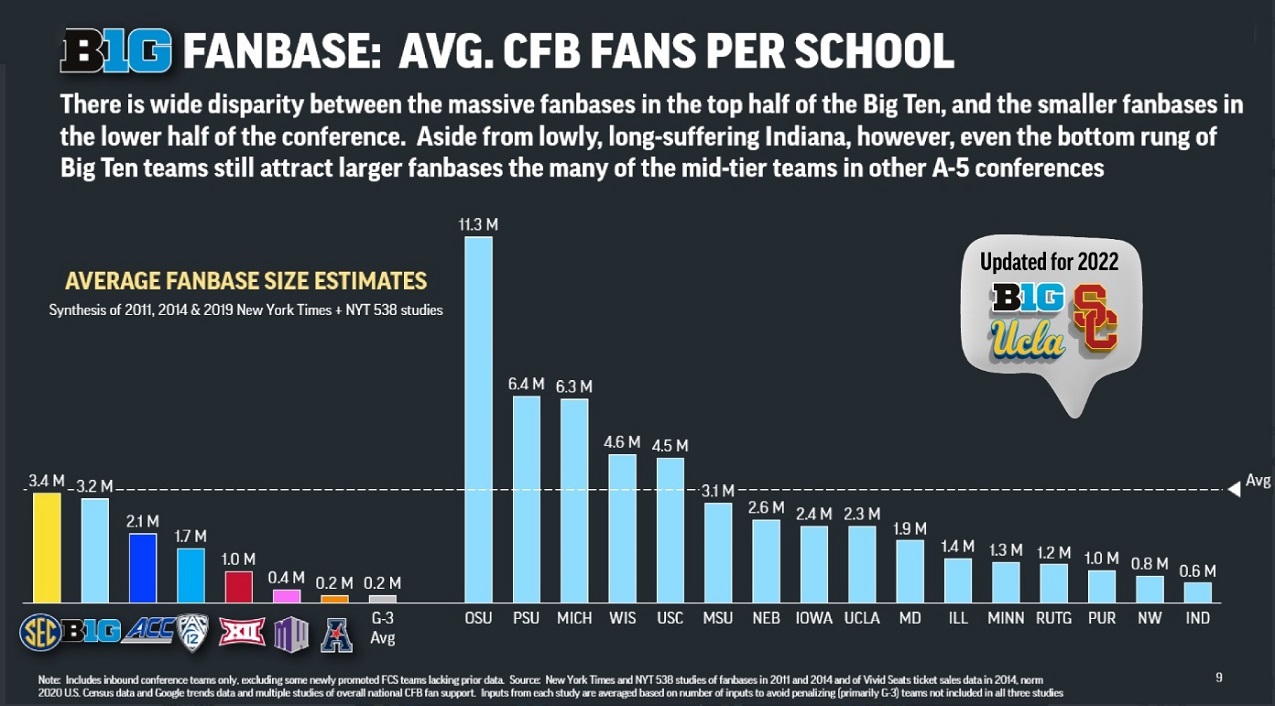 -  August 18th, 2022, 7:53 pm #644222
It's definitely an interesting thing to look at but I'm putting too much stock in it. Especially considering all of that data comes from before we started winning at the fbs level. It would be interesting to see this updated with 2022 numbers. I'm impressed that we had a bigger fanbase then nearly all of the MAC as a FCS school though.

That means the B1G has more Alumni and family than the SEC.
More Alumni and Family mean more fans.
Suck on my Funk and Wagnalls! - Unknown
LU Athletics: Praise God and hide the Co-Eds!!

As noted above, the data is rather dated.

<--idiot, i guess, per bigsmooth/thepostman

RubberMallet wrote: ↑August 19th, 2022, 11:31 am sorry sly i'm not the moment at a place where I can look myself, but do they have an explanation for why OSU is such an outlier out in front?

The reasons they give doesn't really explain it imo.

Imagine if Texas didn't have several other P5s in their state competing for attention and it makes sense. Texas is twice the size of Ohio but has 5x more P5 teams and is full of transplants tied to universities outside the state compared to Ohio. New York is the only other state with as big of a population as Ohio with only 1 P5 team but Ohio is a huge football state by comparison.

It also helps that Ohio St is located in a centralized city that is no more than 2.5-3 hours from anywhere in the state.

<--idiot, i guess, per bigsmooth/thepostman

-  August 19th, 2022, 5:42 pm #644251
And much the data used to build these rankings is anywhere from 3-10 years old. If you click the link you will see how they estimated potential for fan base since there is little tangible evidence of fan allegiances that can be measured aside from ticket & merch sales as well as TV ratings.

I grew up in Ohio a Buckeye fan since they were essentially the only school with any attention. With the proliferation of all Divsion I schools receiving a decent amount of coverage I suspect those numbers are rather inflated these days. The State of Ohio has a total of eight FBS programs (OSU, UC, MU, OU, BGSU, UT, UA, KSU) which is not factored significantly into the rankings. It is also why Syracuse who no one has paid attention to since Donovan McNabb was tossing passes to the Missile is listed at 14th overall. Honestly they are not a Top 100 fan base in reality.

Athletics merchandise sales increased from an average of $2.5 million a year since 2005 to $3.7 million last year for a 48% increase.

Even with covid messing with our attendance numbers early in the season last year that area has improved since they did these studies. Although that comparison is apples to oranges considering most tickets used to be general admission and significantly cheaper.

I have no clue how much interest in the program has grown but there's no denying it is growing.

RubberMallet wrote: ↑August 19th, 2022, 11:31 am sorry sly i'm not the moment at a place where I can look myself, but do they have an explanation for why OSU is such an outlier out in front?

It is interesting to note that the "fanbase" for the two teams in ALABAMA nearly double the state population. #RTR

Wow!! Starting to see some support for the dome. I[…]