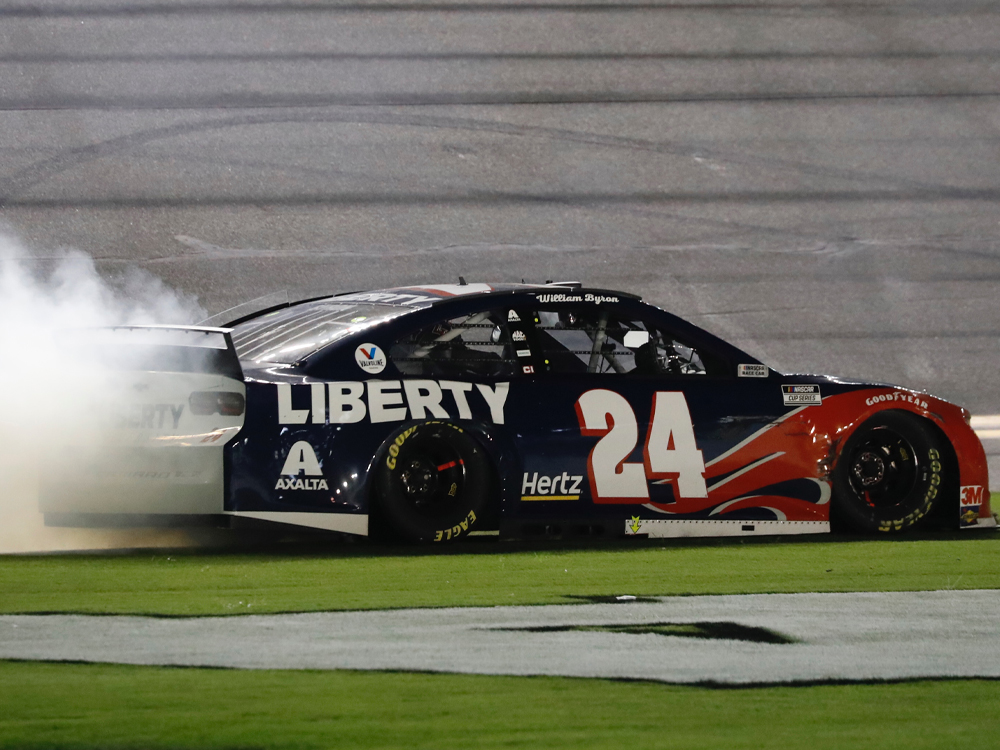 Class of 20Something wrote: ↑March 1st, 2021, 8:57 am Rephrased, who was more dominant? And the answer is Byron. The quality of his opponents doesn't get better.

They sure had the right strategy. Set the car up for the low lane and dominated all day. He's locked into the playoffs early.

-  March 4th, 2021, 10:27 am #622922
Sure wish we would capitalize more on the investment that the University has made with William and his career. Even ASOR could emphasize his rise and success a lot more. This is not just an ordinary sponsorship or advertising endeavor that happens to reach a lot of people. It's a current Liberty student who has risen to the highest level of the most competitive, most popular motorsports division in the country. He is with what some have described as the NY Yankees of race teams and he has delivered more positive national TV air time for Liberty University than arguably any individual since Jerry Sr.
The fact that he has won twice at this level on two of the most prestigious tracks against multiple Series Champions that are nearly twice his age is really rare is phenomenal. Perhaps 4-time Champion Jeff Gordon is the only one to accomplish anything close at his age. I have never met him, but he seems like a great kid as well. With the advent of COVID 19, racing has seen a resurgence that we have not seen in this sport in quite awhile. I own a racing collectables shop and my business has seen an exponential growth in young fans in the last year. I hope LU can take advantage of the investment and give this rare accomplishment it's due. I am a Flames Club member with football and basketball season tix, but seeing LU represented at the highest level of motorsports every week for 9 months out of the year is just as exciting to me.
TH Spangler, Longshots, Sly Fox and 3 others liked this

Maybe we don’t like you after all
flamehunter, Class of 20Something liked this

Guy likes to drink beer and was sponsored by Miller Lite. 25 year old me couldn't turn that down.

My rebuttal : he’s a doosh and his dad’s worse

As long as we can all agree that we hate Kyle Busch everything is fine.
PAmedic liked this

Really anyone not named Mark Martin

-  March 30th, 2021, 10:54 am #624239
....and even more important, up to 6th in the Monster Energy Series Cup point standings! We are witnessing a great maturity taking place before our eyes as William continues to improve his consistency and track awareness. BS call as announcers said that WB "turned" Ryan Newman when Newman clearly came down into the bottom lane while being pressured from the outside. Such is the deference given a 43 year old when racing a 24 year old. Love RN but William was not at fault. Given a few more laps of green flag racing, no doubt William could have advanced further. The important thing is the cup standings where William has moved into sixth place after a terrible 26th place finish in the first race of the season. Two weeks from now in Martinsville his patience and maturity will be put to the test even more as Nascar's shortest track is a pressure cooker. Poor qualifying cars start the race a half a lap down and the slightest mistake can put cars a lap down early. Nobody gives an inch.
Great to see the Liberty paint scheme on TV all week!

-  April 4th, 2021, 11:44 pm #624457
Not trying to use the board for free advertising, but wanted you race fans to know that my Raleigh convenience store has also been a Nascar Collectibles store for the last 26 years. I have the largest selection of Nascar die-cast, hats, tees and paraphernalia to be seen between the N.C. coast and Charlotte. I started following William when he was in the truck series and my daughter was an LU student. I therefore have die-cast of most of the cars William has raced from the x-finity series to the current cup series. My website is groceryboyracing.com if you are ever in the Raleigh area. I have stuff from most of the other contenders as well. I also have a pretty good selection of LU stickers and a Kevin Fogg locker room door complete with Liberty logo on display in plain view of the cash register. Please come by and say hello if you are in the area.
ballcoach15 liked this

Yesterday, had a guy ask me where my mask was. Let[…]