flameshaw wrote:Seems to be a pretty good hire being that Jr. only vetted him for 4 days.

Based on what I know from his previous posts baldspot, that statement by flameshaw was absolutely dripping with sarcasm. He apparantly was privy to some inside info that JLFJR had been looking into hiring Ian and thoroughly vetting him for months before the hire was announced.

-  June 30th, 2018, 10:48 am #553384
Jeff’s contract ended the summer before he was fired. He was month to month through football season that year. Jerry had been looking into Ian for a while but waited until Jeff came in wanting to fire Turner before letting him go.

thepostman wrote:I'm glad things have worked out with Ian and that I was wrong about him but I really wish that Jerry handled it better and that he didn't believe TG was so valuable. I don't get it.

We all know(well some of us at least) what needs and should be done by November. If it does not happen, then there’s no logic in the decision making on this subject.

We all know(well some of us at least) what needs and should be done by November. If it does not happen, then there’s no logic in the decision making on this subject.

I guess Ian and Jerry are not ¨some of us¨, because if they believed they already knew what needed to be done this November, they could have done it last December. I suppose you could argue it was not wanting to eat a year of the contracts for Gill and his coordinators, but if they really believed it was so bad that no amount of success this season would change their minds, IMHO they would have pulled the trigger. Gill has this year to show them he is up to the job. I don´t think it´s so much an arbitrary number of wins as it is demonstrating we can compete game in and game out at the FBS level.

I definitely agree with that. Jerry made the decision to move on from Jeff long before he was actually let go. He just used the end of football that year as the point where he made it official.

-  June 30th, 2018, 7:35 pm #553408
JB’s best contributions was building a sports culture and helping make the flames club viable. Coaching hires/extensions we’re bad for the most part. Its hard to survive whiffing on football and basketball hires and then extending coaches based off a lucky conference tourney and a blocked fg and road win at jmu.

He also genuinely loved and bled LU and you could see how the overall state of the program really mattered to him. He desparatey wanted lu students and alums to be LU fans first. I think he did a good job for the time he was hired overall. I also think Ian a total different personality but i think the right guy at the right time. We will see.

Ian is the right guy for now and is doing a good job.

Jonathan Carone wrote:Who started tailgating at Liberty is definitely up for debate.

Jonathan Carone wrote:Who started tailgating at Liberty is definitely up for debate.

Jon, I would love to hear your side of this. Do you think you predated Mrs. Barber and her little grill?

I remember going to one of those early Flames Club lunches when JB pitched the "tailgating" idea to us. It started slow, but LU tailgating has really taken off since then. The facilities people even come by and give us extra trash bags and pick up our trasjh.
"If Cider hit the books any harder, they'd press charges"--Lefty
"When you’re right you’re right"--Purple
"I shall not participate in many discussions..."

-  July 1st, 2018, 3:31 pm #553450
The first football game of Barber’s tenure was Rocco’s first game in 06. It was a Thursday night in a monsoon. There was an SFC “tailgate” that was essentially come get food and leave. A few of us hung out in the parking lot in the rain to get ready for the game but there was nothing huge or terribly organized.

The first organized tailgating I remember seeing was the FlameFans homecoming tailgate a few weeks later in 06. Smoothie coordinated most of that. The other organized one that day was Steve Lloyd. There were a few smaller ones between the first game and homecoming, but homecoming 06 is when we really started to see some change. It was also the day I gave Dr. Falwell a hot dog in the middle of the homecoming parade.

The 07 spring game there were a couple tailgates, with Smoothie and Steve’s being the big ones.

The 2007 season is when we really started to see tailgating take off. It was the first year we had a dedicated tailgating row in the bookstore parking lot. By 08, tailgating had spread from the hockey rink all the way to DeMoss.

-  July 1st, 2018, 4:59 pm #553458
But without JB and the athletics dept as a whole getting behind it and really pushing it I would argue it wioodnt of grown as quickly as it did. I think that taking that away from JB and his staff and taking away one of their largest accomplishments. Creating an event atmosphere around football. Of course there are students and alum who helped lay the foundation but JB and his staff recognized it an help grow it.

Just my 2 cents. I've been wrong a lot lately so I could be wrong here too.

-  July 1st, 2018, 5:03 pm #553459
Oh Jeff gets tons of credit for the game day experience. He completely changed the way things were perceived. He planted the seeds but it took Smoothie and Steve Lloyd to make it happen. 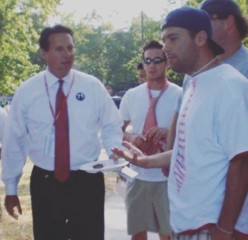 Here is a pic from a tailgate that JB stopped by, the 2nd game of the 2006 season.

Holy Crap. That absolutely backs up what Ian said about the university trying to scapegoat the black football players. It also backed up what Ian and Art said over a year ago. There was an insufficient system in place, but there was a minimal protocol that Art and Ian followed.

- Ian advised Art that due process should be exercised.
What else would you want them to say? Indiscriminately suspend anyone with a whiff of an accusation?

- PH was investigating with their mind made up.
The line of questioning was not investigative in nature at all. They were looking for sound bites to support their narriative.

The more that comes out, the worse Baylor looks here.

Status: Offline
Reply
Return to “Other LU Sports”
25 May

I've noticed a trend at the high school level to f[…]

Are they just pumping it out the back. Doesnt see[…]

I haven't yet been to the Balearic Islands but the[…]